— Husband and wife team overcomes tragedy and the odds to get their secret sauce in big box retailers. — 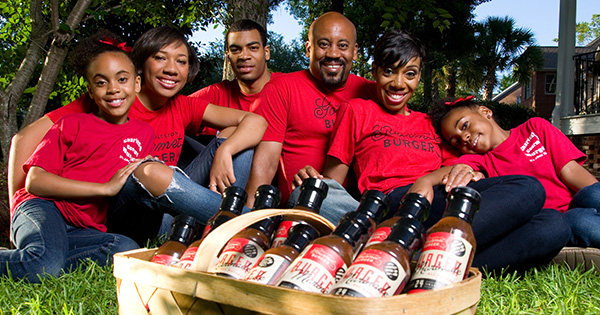 Chevalo, a former FDNY EMS First Responder, survived the second World Trade Center tower collapse on September 11, 2011. His wife, Monique, was formerly a single mother of two teenagers in high school. Three years ago, the two together took a leap of faith by creating a unique backyard burger recipe, and pitching it to major retailers. And they have found huge success!

Their Gourmet Burger Marinade and Sauce has grown from being a staple at local farmer’s markets to being sold in select Whole Foods Markets, Harris Teeter Supermarkets, Cost Plus World Market, Costco Wholesale Club, Military Commissaries, Sam’s Club, and several other retailers. But their latest deal lands their products in 543 Lowe’S Home Improvement stores around the country, as well as 44 select Walmart stores in the southeast and online.

“We pinch ourselves everyday,” says Monique who marvels at how far she has come throughout this journey. “I’ve been told that I would never amount to anything,” she says, reflecting on her struggle to overcome the odds. “No matter how bad of a situation I was in, I always knew that one day I would make a difference.”

Chevalo says that everything in his life changed after 9/11. “Having lost friends and 343 co-workers that day, I look at my life now as a second chance to do something great.” Both Chevalo and Monique regularly give back by mentoring budding entrepreneurs.

For more information about their company and/or to see a list of stores that sell their products, visit www.charlestongourmetburger.com