In 1997, Mel Burgess was an 18-year-old high school graduate from Canton, OH, ready to dive into college life. Another young man he knew from around the school wanted a gun, so Burgess sold him one. After a botched robbery, Burgess learned about complicity, which is being involved in a crime in some way. The young man admitted that Burgess had no knowledge of his plans, and Burgess was charged with two counts of complicity to aggravated robbery. With that, he spent the next 11 years of his life behind bars.

“I wanted something different.”

After his release, Burgess worked a series of jobs involving strenuous, back-breaking work, all ending eventually, because of his criminal record. While inside though, he had already begun thinking about where he wanted to go and what he wanted do with his life. With all the colleges in the Raleigh area, Burgess decided that this was a hot bed of fresh minds, a good place for a tech company. This entrepreneurial venture would put Canton, OH and his devastating experience behind him, and offer him the chance to overcome and find success.

Success proved to be a slow process upon Burgess’ arrival to the Raleigh area. Disagreements with not-so-silent partners prevented the tech company from ever getting off the ground, so he had to come up with a plan B. Burgess had always had a passion for wellness, and when he noticed people out jogging and patronizing establishments that offered healthier food options, this passion was reignited.

New U Fitness and Nutrition was established in 2010 in a small unit where Burgess did personal training and sold smoothies. As his clientele and his exposure started to grow, Burgess got an offer to move New U to another space. Because he was already having issues with maintenance at the smaller space, he took that as a sign to go forward with the larger, 1500 square feet space. So he did, and it turned out to be a huge mistake. In his research, Burgess found that personal training at its basic level is a dying industry. In his attempt to change the way personal training is done and build clientele, it became increasingly difficult to keep the lights on in that larger space. “I believe your higher power gives you signals,” says Burgess, and here is where he found his blessing. Burgess started training executives, who eventually got their human resources offices involved, which led to corporate offerings and wellness programs.

About 300 million years ago, it is said that all seven continents formed one supercontinent called Pangaea. This is Burgess’ concept of wellness. Instead of viewing exercise, nutrition and the medical aspect as three separate pieces, Pangaea Wellness & Development, Inc. brings it all together to achieve total wellness, a state of physical, mental and social well-being. In the past, corporations would stick a treadmill in the corner of the office, or partner with a neighborhood gym and offer employees the opportunity to use its equipment or take classes, and that was the extent of wellness programs. Burgess believes that the new generation wants affordable options, while corporations are looking to reduce insurance premiums and health-related employee absenteeism. With a team of trainers, nutritionists, doctors, nurses, and consultants, Pangaea covers all wellness needs by integrating themselves into companies, creating a healthy culture. This culture offers trainers and classes, as well as team building and other activities to promote confidence, to get people moving and to keep them moving. Hosting health fairs gives Pangaea the opportunity to get to know the company’s employees and their needs, which is important because this culture translates to the employees’ families, or the dependents that also affect insurance premiums. The health fairs also let Pangaea collect wellness indicators, like BMI and weight numbers, which is information human resources offices need for insurance purposes. 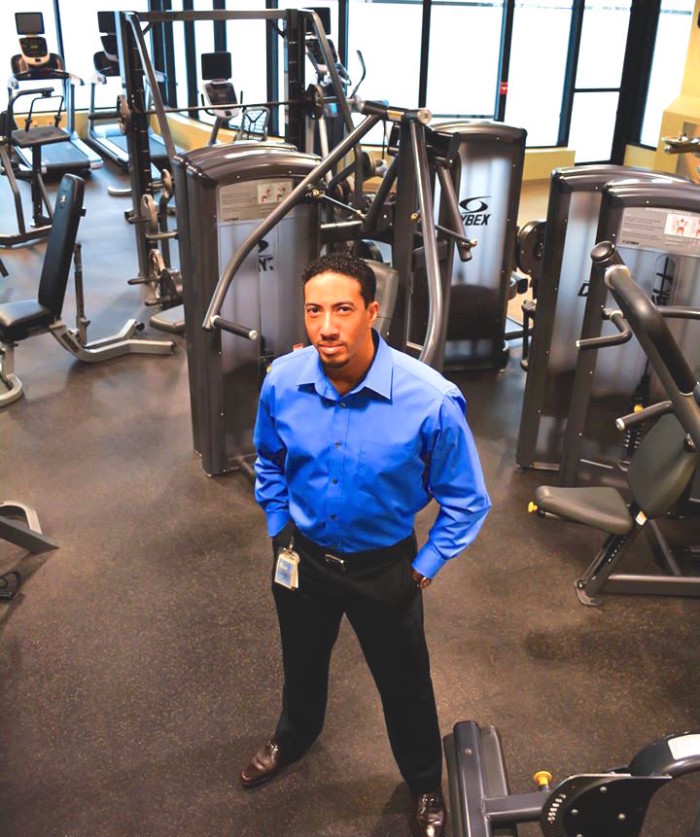 “I’m passionate about total wellness, and if I lose that mojo and drive, Pangaea would be lost. I don’t want to lose.”

Whether it’s corporate or individual wellness, service is key at Pangaea. Burgess contends that while it’s good to know about the muscle groups and other basics about the body, it is extremely important for trainers to also be intelligent and trustworthy, and to have good character. Trainers need these attributes in order to make a connection with clients to build relationships. Currently, Pangaea trainers go through an initial two-week program, and then continuing education ensures they stay abreast of industry standards. Burgess plans to expand this in the future, creating a school where other trainers can also attend and be certified by Pangaea.

“I want to inspire, to show people that they can overcome hardship.”

Six years later, Burgess is happily married with three children, and sitting at the helm of a wellness company worth $1.6 million. Why tell this story now? Burgess wants to tell his own story, instead of having it told for him. This allows him to maintain positivity, as his purpose is to inspire, and prove that hardship and struggle can indeed be conquered.

Burgess has shown and proven that anything desired can be attained, even in the midst of tragic circumstances. As Pangaea continues to grow, they are looking to dominate the industry, change lives and leave a legacy.

Anitra S. Hill is an accomplished program coordinator with substantial experience in the public sector.  She holds a B.A. in English from Tuskegee University, a Professional Writing Certification from NC State University, and a Master of Public Administration degree from Walden University.  Outside of her professional life, she enjoys being outside in the sunshine, preferably on the beach, and listening to music, while singing along.  Born in Brooklyn, NY and raised in Selma, AL, Anitra was a resident of Raleigh, NC for more than 15 years, and is currently reveling in her new home in Atlanta, GA.