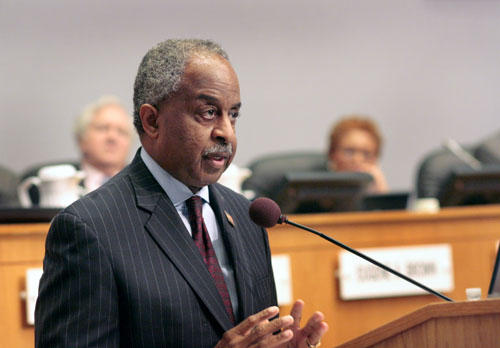 As someone who studies the science and art of leadership and strives to help others develop their own leadership potential, I’m extremely interested in those who decide to lead in the public sector. Therefore, it was an honor to sit down with and interview Mayor Bill Bell, in the midst of major economic and population growth in the city of Durham. I approached the interview as an opportunity to discuss his leadership legacy since this is his (self-pronounced) last term in office as mayor. I often think about succession planning, especially amongst Black American community leaders. There are often young emerging leaders with interests in political and community leadership but often they don’t possess the information, network and mentorship needed to move forward with their aspirations. However, as more seasoned leaders move forward in their lives and careers, it is imperative that they pass on the torch of leadership to individuals with a passion and desire for their communities.

As Mayor Bell and I discussed his leadership journey, he expressed that he is currently not in a position to say, when he leaves office, that there is someone ready and positioned to take his place. However, he voiced that he would support the mayor Pro-tem if she were to pursue the position. In addition, Bell shared advice about how young people can get involved in the political process in Durham and other cities. He shared that if someone is interested in seeing change in their community, they should get involved in their local government by serving on committees and participating in activities to learn more about the “ins and outs” of the local government system. Also, he expressed that getting involved in the community exposes and introduces you to other people in the community who might become supporters if you were to run for an elected position. Bell stated, “The point is, I got involved in the community before I decided to run for an office.”

Our conversation continued and it was apparent to me that I wanted to know more about Mayor Bell’s leadership journey. When others share their stories, it often provides more insight into the keys to successful leadership than general advice without context.

Mayor Bell shared that he had no intention to get involved in politics. He relocated to the area in 1968 as a young electrical engineer working for the IBM Corporation. He only expected to be here for 4-5 years. However, he eventually got involved in his neighborhood association and was selected as the president. His involvement was prompted because of a rezoning issue that had to be resolved by the Durham Board of County Commissioners. Eventually, the neighborhood lost the rezoning case, but the situation gave him more insight into how the local government worked.

Bell reflects, “I was naïve enough to say, if you can’t beat them, join them.”

Therefore, he ran for the Durham Board of County Commissioners in 1972 and was elected. He eventually became the chairman of the Commission and was reelected several times. Although he lost an election in 1994, his dedication and commitment to public service compelled him to run again in 1996, resulting in a victory. Throughout his time with the Board of County Commissioners, Bell continued his career with IBM and was able to bridge the corporate with the governmental perspective.

In 2000, he was approached about running for mayor of the city. Initially, he had no interest, but after thought and consideration, he decided to run and was elected. Bell expressed that he has enjoyed the mayoral position more than the county commissioners because he has had an opportunity to work on “issues that really mean something” to him and that he can see the impact, directly or indirectly.

I asked Mayor Bell, who is now 75, to reflect on his political career and share his most significant decisions and impact. He prefaced his reflections by stating, “I realize that you don’t do anything by yourself. It’s a team effort.” He recounted what he saw as transformative actions taken while he was with the board of county commissioners: 1) Hired the first black county manager which paved the way for other positions in local government, 2) Changed the county commissioner meetings from day to night to be more accessible and transparent to the citizens, and 3) Merged the city and county school systems. During his time in office as Durham mayor, he’s been most proud of the revitalization of downtown Durham, the contribution of the DPAC to the city, and “just as important as the revitalization of downtown is the revitalization of our inner city neighborhoods”.

When asked if he had any regrets, he stated that he didn’t have any but he wished he “had a magic wand to address all of the issues that come to my desk.” He expressed that he would’ve liked to have gotten a better handle on reducing crime in our community. “2015 went through the roof in terms of violent crimes (homicides especially), and we’ve been doing well but there’s still a way to go. The discouraging part is that when you look at the crime in the community, there is a lot of black on black crime.”

As I think about the changing landscape of Durham, in the name of revitalization, I can’t help but think that are two different Durhams, existing in the same space. There are still great economic disparities in communities of color and much of the crime that the city of Durham experiences is a reflection of those disparities, mainly in the form of poverty. Mayor Bell, in his final term as mayor, is now focused on eradicating and eliminating poverty in Durham and has developed a Poverty Initiative. The initiative includes committees that focus on various aspects of poverty, such as education and access to health care. Each committee presented 3 priority goals and 2016 will be a year of executing the goals.

At the end of the conversation, I asked Mayor Bell to share some advice for those who sense a call to lead (in any environment). He shared several practical and poignant thoughts for those wanting to lead and sustain that leadership:

His final piece of advice was, “If you think you know what you want to do, find someone that’s doing it because it will either give you a road map for how to get there or it will show you that perhaps you don’t want to do it after all.”